Research Trends and What you will expect in SEMANTICS

To get started, let us first analyse the topics covered by SEMANTICS in the previous years along with the organizations and countries participating in the conference. Thanks to the AIDA knowledge graph, we have the following information:

Publication and citation analysis show that the contributions presented in the conference gained constant attention from the relevant communities. Despite the Europe-centric nature of the conference with Germany, Austria, Greece, the UK, and Spain leading in the participation rate, the US is among the top three countries in terms of number of publications. This shows the international impact of the conference series.

In terms of the topics covered by the conference, we look at 5-years, and 10-years views (see Figures …). It is observable that topics related to Semantic Web, Query Languages, Search Engines and  Information Retrieval have been dominant in the past decade. 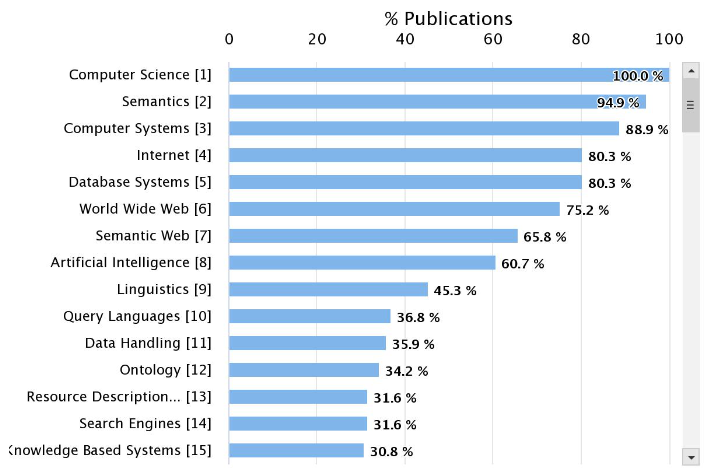 Artificial intelligence became a more important part of the conference in the past 5 years. Furthermore, knowledge-based systems and ontologies remain an active topic that is naturally expected from the objectives of SEMANTICS. Overall, we can observe that SEMANTICS is a home and community for knowledge and data-centric AI topics.

What’s next for SEMANTICS?

One major trend of the past decade is the widespread proliferation of knowledge graphs. In contrast to their early years of adoptions, knowledge graphs are now increasingly used for machine learning downstream tasks such as question answering, generative dialogue systems, recommender systems etc.

These aspects are explored not only in academia but also in industry and enterprise levels. For example, major industry players such as Google, Amazon, Facebook or OpenAI work on integrating knowledge into machine learning systems. One area in which this was done are large-scale language models, which have gained attention in the AI community in the past years. Advances in language models will bring better understanding and communicating between machines and humans towards building up impactful technologies. Those kinds of communications may eventually reach human-level performance. Nevertheless, there is an ongoing debate in the AI community on what limitations they have without a grounding in factual knowledge and how such knowledge can be injected into them.

Traditionally, AI relied on Big data where algorithms needed huge input for training – however, the new trend is also to address domains that are dealing with heterogeneous data that lacks unified structure and is available only in smaller quantities. Therefore, it is becoming more and more important to obtain high quality data and develop data efficient AI approaches.

Since it is an important mission of SEMANTICS conference series already from the beginning to bridge academia and industry in the leading technologies, the conference continues embracing new directions and welcomes contributions. … SEMANTiCS 2022 especially invites contributions that target the intersection between computational semantics and neighboring research areas such as machine learning, language technologies, sensor technologies, distributed ledgers and beyond.

We are living in the era where the biggest and the most transformative technologies of Artificial Intelligence are under development that will have a huge impact - according to the Google CEO even more than fire, electricity on the development of human life.

We believe that the current and next generation of AI models should be able to (i) include data in a more sample efficient manner, (ii) will need to handle both structured and unstructured data, (iii) will need to be able to work with smaller quantities of knowledge for a particular domain, (iv) will need to obtain a deeper semantic understanding of input data and (v) will need to work with heterogeneous data sources - in short we believe that we need to make the next step from raw data processing to data intelligence. SEMANTICs wants to be a venue for promoting the next generation of Artificial Intelligence methods driven by data intelligence.

Recordings, Proceedings and Slides of 2022
From CMS to Intelligent Content Hub: Why the need for a change?

A Shinning Example of Explainable AI
The marriage of Knowledge Graph Data with Automation, Intelligence and Processing Power
We cannot research Semantic Web technologies in isolation.
Discoverability and Responsible use of Data using Knowledge Graphs

Towards Querying Heterogeneous Federations of Interlinked Knowledge Graphs
We need to think about new approaches when modeling knowledge for AI
Taming the beast ... or ... How to make sense of knowledge graphs

Research Trends and What you will expect in SEMANTICS

The icing on the Semantics cake: The workshops!
Business challenges 2022 and possible answers at SEMANTiCS