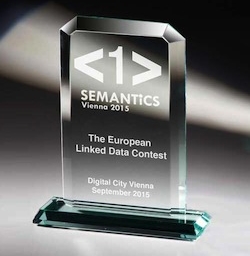 In all matters related to Semantic Technologies, European Research and European Industry plays a leading role. The annual SEMANTiCS conference is the focal point to showcase the vital European Semantic Web and Linked Data scene. To attract even more attention, we introduce a novel prize. Therefore, we got inspired by the Grand Prix Eurovision de la Chanson Européenne, which is also to be held this year in Vienna such as SEMANTiCS Conference.

This year the ELDC is awarded in the categories Linked Enterprise Data and Linked Open Data, with €1.500,- for each of the winners. Winners also get  tickets for the SEMANTiCS conference in September this year. Second and third place will get a honorable mention together with the ELDC trophy. The award ceremony will be held on the 17th of September in Vienna.